Back from another trip to Europe! I took a week off to visit Austria and Germany for the first time last week. While it wasn’t my intention to go to Munich during Oktoberfest, as I was planning on going to the city anyway I figured it wouldn’t hurt to coincide my travels with the festival. I’m glad I went because I ended up having a great time and it was so much fun experiencing it in person.

My first stop however, was Vienna. My overnight flight from Toronto landed at VIE early in the morning. Once we got into the arrival hall I quickly stopped by the tourist info to purchase our Vienna City Cards, then it was off to the hotel to drop off our bags.

My first impression of Vienna was that the trains into the city were very confusing. Everything was automated and there was no one to ask for help inside the station. As I had already bought the Vienna City Card which includes transportation within the city centre, I needed to buy a supplementary ticket to cover the difference from the airport. However, trying to buy the tickets myself through the ÖBB ticket machine was not the easiest thing to do.

After looking through all the options there was one button which basically told you to ‘click here if you already have a transportation card’ to buy the supplementary ticket. It wasn’t very intuitive at all. Even before boarding the train I didn’t notice a spot to validate my card with a time stamp, so I literally just hopped on the train and hoped for the best. Lol

[Side note: In retrospect, buying a 48hr Travel Card would have been better value since I only managed to save €5,50 in admission costs using the 48hr Vienna City Card. I don’t really recommend buying it unless you take full advantage of the discounts. But if you plan on visiting many attractions then the Vienna Pass would probably be better value. I have no idea why all these passes exists when they could be better consolidated, but make sure you calculate the savings!]

Luckily Vienna was much easier to navigate once we got to the city centre. From Neubaugasse Station it was a 7 minute walk to the hotel which Helga had recommended for me, the Hotel am Brillantengrund. The hotel was super cute and I had a fabulous stay during my two nights there. Plus since I had booked directly through their website, our breakfast was included in the price. I would definitely stay there again!

After freshening up at the hotel, we took the tram to Schönbrunn Palace. I didn’t have a lot planned for the day since I figured I would be jet lagged, so we took it easy and spent the majority of our afternoon at the palace. We bought the Classic Pass, which includes entry to the Orangery, Privy Garden, Gloriette and the Maze & Labyrinth. Since it was busy that day, our entry to the palace wasn’t for another two hours. It was perfect since that gave us time to grab lunch inside one of the restaurants, the Residenz.

My first taste of Viennese food was something I completely forgot the name to. Hehe. It was also the first of many meals in which I would be eating meat and potatoes. =P 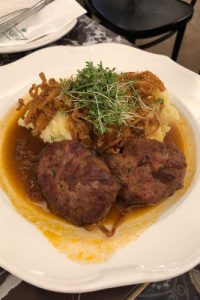 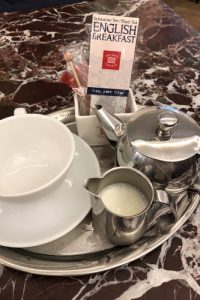 After lunch we made our way to the rest of the palace grounds. It was raining on and off that day, so we tried not to linger too long outdoors. We did make the trek up to the Gloriette, which was definitely worth it for the view of the palace from afar. The garden maze was also a lot of fun, except it was more difficult than initially thought, so we didn’t actually make it to the end.

As for the palace itself, while I had initially thought it looked a little underwhelming from the outside, I enjoyed the palace tour inside. The admission comes with a free audio guide, so it was nice having commentary as you go from room to room. Overall I enjoyed the visit to Schönbrunn and I was glad I had the extra time to visit the garden attractions.

For dinner that evening we headed over to Stephanplatz. It was still reasonably warm for a late September evening, so it was great being able to sit outside and enjoy dinner. People watching from the city square is one of my favourite things to do in Europe, so it was definitely a good way to end off the night.