Considering this blog entry is about two separate things, I think it goes to show you just how much I packed in on my trip this time. Lol

The day after Disney I had plans to visit Moomin Valley Park with another friend. The park had just opened a few weeks prior, so we figured it would be less crowded if we went on a weekday. Although it’s not an amusement park, there are a few attractions inside to visit. However, while admission tickets can be purchased ahead of time, attraction tickets must be purchased on the day of, so you need to arrive early before they sell out. 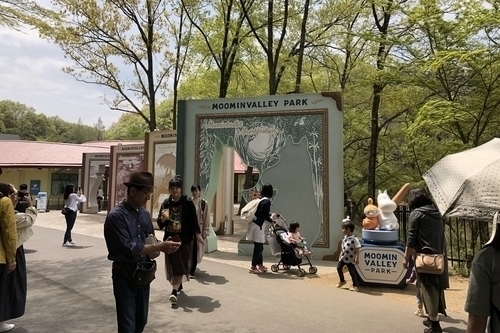 As the park is located in Saitama, it takes about an hour to get there from Tokyo. Since I was really sick the night prior, we had already told our friend that we wouldn’t be able to get to the park for opening. We decided to meet at Ikebukuro Station at 10:15 to take the limited express train the Hannou Station. I was extremely groggy from sleeping about 12 hours the night before and I still didn’t have any appetite, so I wasn’t in any condition to travel. Somehow we managed to make it to Hannou Station, but then I got really dizzy when we arrived so I had to sit down. (T__T) By then it was too late to turn back, so I ploughed through and got on the local bus towards Moomin Valley Park.

Moomin Valley is actually one of two parks built around Lake Miyazawako, which was chosen for its scenic location. Metsä Village was the first one that opened back in November. The village is Nordic inspired and includes a marketplace, shops, restaurants and workshops, and is open to the public free of charge. It’s easy to forget you’re in Japan when you’re in a lakeside forest setting. =P

By the time we walked over to Moomin Valley Park, we found out tickets for the Moomin House tour were completely sold out for the day. I figured it would be the case since we got there so late, but I was glad we could take it slow in the morning. I still hadn’t eaten very much and since it was nearing lunchtime, we decided to stop for lunch first. 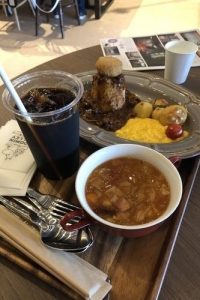 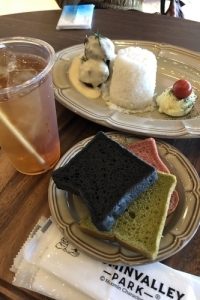 I wish I could have ate more at lunch because the food looked so good. Thankfully I was able to finish most of my soup and had a glass of ginger ale, so I had a bit of energy back. After lunch we went to the upper floors of the building where there was an exhibition on Moomin, including a huge diorama of Moomin Village.

Since we didn’t have much interest in the other paid attractions inside the park, we made a loop around and caught some of the show outside. Then we spent time inside the gift shop before leaving. Ideally I would have liked to visit Metsä Village and Kawagoe as well, but we had to make our way back to Tokyo so I could go to the concert later in the evening. =P 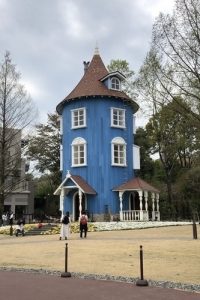 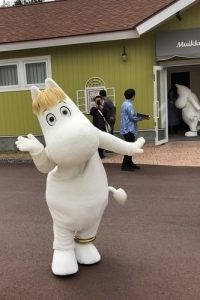 So part two of my extremely long day starts here – I won tickets to Arashi’s 5×20 concert! The entire purpose of planning my trip in April was to coincide with their concert tour, but I initially didn’t hit for tickets. After a lot of back and forth deciding whether we would keep our original plans, we decided to go to Japan anyway since everything was booked.

I only managed to get last minute tickets because they opened up balloting for obstructed-view seats in the arena. It was a stressful situation leading up to it because I didn’t know until two days prior if I had actually won tickets. Plus the screening/ID checks at the gates was a bit of a nightmare, so I didn’t want to get my hopes up during the trip. It was only when I was finally in my seat that the reality of being at their show hit me. 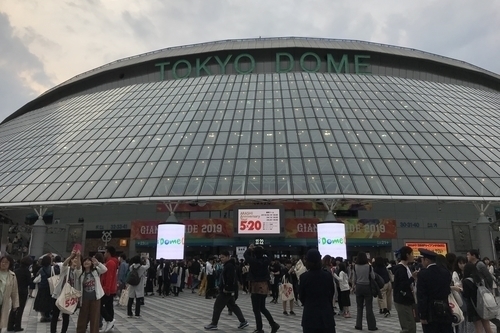 It’s been about four years since my last Arashi concert and they are still as amazing as always. I totally forgot what it was like being at a live show. There’s so much energy that it was hard not to stand up and enjoy the performance. I’m sure the adrenaline rush also helped me get through the night, cause I had the equivalent of one meal in the past 30 hours. Lol

As it was their 5×20 concert, most of the songs on their setlist were their popular singles. I haven’t been listening to their new music lately, so I was pleasantly surprised I still recognized the majority of their songs. The thank you speeches at the end were especially touching and it was hard not to tear up when they spoke about how much gratitude they have for their fans. I’m so glad I was able to watch them one last time before their hiatus!

The entire concert ran for 3.5 hours. I knew it would be hectic trying to clear out 50,000 fans, so I was following the crowds out from the arena and somehow ended up at Kasuga Station instead of Suidobashi. Since I had backtracked a stop it meant I easily found a seat on the subway. The even better thing was, as I was staying at Shirokane this time, it was only one line back to the apartment! Even though I had such a crappy start to the day, I’m so glad I was able to end it with such wonderful memories. =)