I’m glad to say Day 2 went so much better than Day 1. I steered clear of the combini, so there were no more sandwiches to haunt me during the concert. I actually had better seats at the concert on the second night. ROW 6!! Well, I was still in the stands, but considering the previous night I was sitting in row 47, being able to move up was a bonus. Actually, I had the reverse happen to me last year in Taipei, so I actually prefer having better seats the second night! 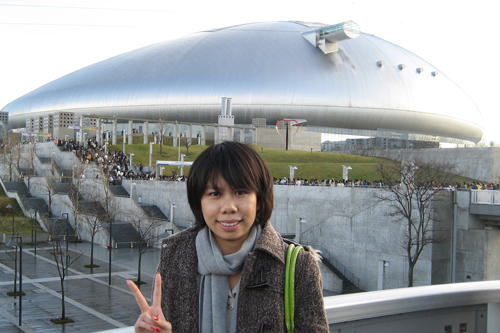 Again, I was a little antsy at the entrance gates going into the dome. I passed through the security checkpoint easily. It wasn’t until I was at the counters emptying my drinks into cups (for some reason they prefer using fountain drink cups over pet bottles), the lady helping me empty my bottle asked me a question. I had no idea what she said, so I just nodded and said ‘hai, hai’. She gave me a quizzical look but didn’t ask me further. I almost had a panic attack!

Anyway, when we finally got to our seats, I was so amazed at how awesome our seats were! We were literally right at the edge of the stands. It meant that when the boys would come by on their wheelie carts, they were actually life sized! I was so excited for the concert to start!

Since we got in early again, I had a good hour or so to wait. I was comparing uchiwas with the lady beside me, who had a Nino uchiwa. Of course I had my Sho uchiwa, but I was wearing my homemade Uta Onii hat, so I guess my ‘loyalties’ were a bit divided. Hehehe.

The show started on time the second day. Once again the lights dimmed and the boys flew out hanging from the balloon. The set list for the second night was exactly the same. However, I can assure you I enjoyed the view way more. I think everyone in our section went insane cheering whenever the boys came by in their carts. Sho didn’t seem to come by as often as the others, but I think Aiba-chan came by the most. Nino was actually pointing to the fans in the first row. I think they had something written on their uchiwas, so Nino was laughing at their comments. It was really cute to watch!

Since I wrote more about the first half of the concert in my previous entry, I’ll comment more on the second half of the show starting from the MC –

Sho began the talk by mentioning how surprised he was at last night’s concert because there were so many male fans in the audience. So, wanting to know exactly how many male fans were there tonight, he asked all the ladies to keep quiet while the men cheered. I was shocked when I heard all the voices cheering for Arashi! Then they were like, ‘I wonder if we can get them to say something embarassing, like daisuke’. So to my utter astonishment, the men all yelled out daisuke to Arashi! It was amazing! Of course, they didn’t leave us out, since all the ladies had a turn as well.

Then moving onwards to the next song –

I can’t begin to describe how awesome this song was now that I was actually paying attention to the stage and not to my plastic bag. Sho sounded so good singing his solo! He danced on the moving stage as it moved towards the back. At first I wasn’t sure if adding choreography would work for the song, but surprisingly they changed the arrangement slightly, which added a nice beat to the music. It made the dancing look absolutely drool-worthy. Plus Sho was wearing his sparkly green hoodie which made him look very very good.

Then it was Jun’s solo, Wish. Another thumbs up performance for Jun! I generally cringe every time I hear Jun’s solo in their songs, so needless to say I’m not very fond of his voice. However, whoever helped him arrange his solo was brilliant, because the focus was more on his dancing and his ‘performance’ on stage. I really liked how they added a jazzy feel to the song. He broke the song into three segments, one of which he stood in the centre and danced to the music. Then he began to ‘conduct’ the orchestra. At one point there was a water display where bursts of water would fly out from the edge of the stage. Every time he tapped his fingers and new burst would spurt out in tune with the music. I was so impressed by all the work that went into it!

Attack It! was just an explosion of energy. I love how they had the lyrics pop up on screen so the audience could sing along to the song. It was super catchy.

Afterwards it reached Ashita no Kioku. It was my second favourite performance of the night. All five of them were split up along different sections on the stage while these five screens lit up showing photos of the individual members. The spotlight would flash onto each member as they were singing. A photo montage played steadily throughout the song that highlighted all their ‘memories’ in life. It was so beautiful. In the end, all the photos came together to form the word ‘Arashi’.

*Starts to tear up*

Of course, it led up to the climax of the night which was the 5×10 medley. I guessed while the photo montage played on, the boys went and had a quick costume change, caused they reemerged for A.RA.SHI wearing –

It was clearly evident than none of them really enjoyed wearing the costume. They were all trying to ‘cover up’ their important parts! Hehehe, lucky for them they only had to endure it for one song.

I think out of the medley the one song I wanted to hear the most was Kitto Daijoubu, since they never sang it at AAA Taipei. I must say that Sakurai does not disappoint with his rap intro to the song! Love it to pieces!

Next up were the thank you speeches. I think most of what they said were the same as the previous night. However, Sho was being super cute by ending his off in English: “I love you soooooooo much!” Nino”s ending was very appropriate too. He said: “Saigo…(pauses to collect his thoughts)…Mario o katte kudasai! Sasuga the Nintendo Spokesperson!\

Then of course, the actual climax was 5×10. Again, I don’t think any words could describe how stunningly beautiful and touching it was to hear the song live. They all gathered together on the moving stage when they finished the line, “Arigatou, kore kara mo, arigatouuuuu” and they hung on to the last word as all the confetti began spilling out. I think those 10 to 15 seconds were the most precious seconds within the entire concert. It was so beautiful that I want to them to continue holding onto that note forever.

Of course, since I figured they’d have to breathe at some point, I knew it wasn’t going to happen! =P

Anyway, after 5×10 they went offstage to prepare for the encore.

I was a little disappointed that they only ended with two encores. I thought for sure they’d at least add another song, since they usually out-do themselves the second night. Unfortunately no matter how much the crowd cheered, it didn’t happen and those stupid organizers were quick to come on stage to direct people how to exit. 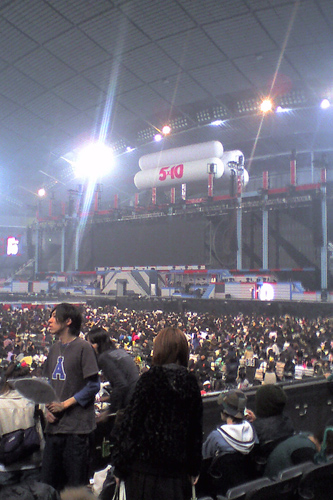 Since we were seated further down this time, it meant we had to wait longer before we could actually leave our seats. Once we got out, it was jammed in all directions. It was twice as bad than the previous night, as it took us 45 minutes to exit the dome itself.

When we finally emerged at Sapporo Station, we were famished. We ended up going back to Susukino to eat ramen at ramen street. Upon leaving, I noticed they finally replaced the ad so I took this one last shot from across the street: