The day after Oktoberfest was the second of our two side trips. I was a little relieved that it would be the last day in a row where we had to travel long distance on the train. However, it was also our earliest start and I had the hardest time dragging myself out of bed that morning. (T__T)

From Munich HBF we took the train to Füssen, then waited for a bus to take us directly into Schwangau. There were so many tourists heading to Neuschwanstein Castle that they ended up getting two additional buses to service that route!

Once we made it to the village we had to wait in line at the ticket centre to pick up our reserved tickets for the castle tour. It’s definitely worth reserving tickets in advance. While I still had to wait in line to pick up my tickets, the line up to buy tickets went outside the ticket centre and down the street! Plus the estimated entry time to the castle by that point would have been for after 5pm, so you would be waiting around the entire day to enter the castle.

After paying for our tickets we grabbed an early lunch at one of the shops in the village. I had my first taste of currywurst and it is exactly how you would imagine it to taste. Hehe. 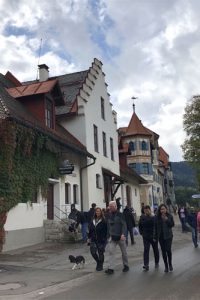 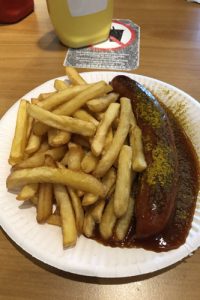 Since we paid for both castle tours, our first tour was for Hohenschwangau Castle. The regular path up to the castle was closed that day, so we ended up walking about 30 minutes to get there on a different route. The walk up was actually quite pleasant, although you can also take a horse carriage up if you so desire. =P

Once we made it up we had enough time to stroll around the garden before our tour began. Castle tours are numbered and basically start 5 minutes after each other. Your tour number will be printed on the ticket and once it’s time you just scan the barcode at the ticket gate to go inside. I think they have the algorithm figured out to perfection, as there was always a steady stream of people coming and going. 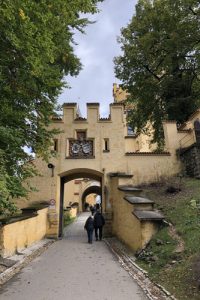 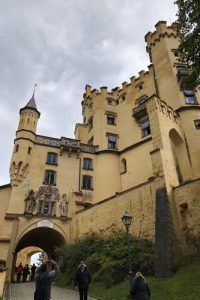 After our first tour ended, we walked back down and paid for the return trip to Neuschwanstein on the shuttle bus. The two hour gap between the tours allows for sufficient time to travel between both castles. However, if you are keen to visit Marienbrücke and see the castle from afar, it would be better to wait until after the Neuschwanstein Castle tour because there’s a ridiculous lineup to get to the bridge!

From where the bus dropped us off it was a solid line all the way up. We were lucky we managed to make it there in 20 minutes, but we could only stay very briefly to take a few photos. The view is definitely worth it, so plan accordingly if you don’t want to miss the start of the tour time! 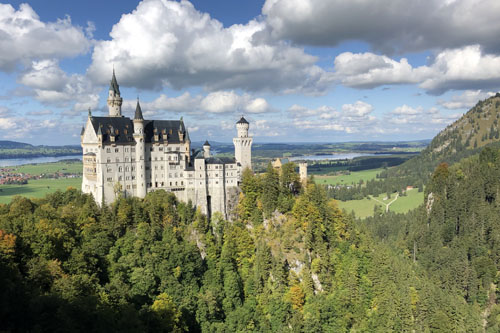 As for the tours, Hohenschwangau is definitely the better out of the two. The tour group size is smaller and I didn’t feel like I was being rushed through all the rooms. The interior of the castle is beautifully decorated and there’s more history in its construction. Even if you don’t do the tour inside the exterior alone is worth visiting. In comparison, while Neuschwanstein is like a fairytale on the outside, it was never fully completed, so it lacks a bit of the charm that Hohenschwangau had.

After the tours ended, we took the bus back to Füssen and managed to make the earlier train which goes direct to Munich HBF. While 2hr+ train rides for the past four days haven’t been that bad, I really should spread my travels out more evenly. At least it’s a good way to break up the day from a lot of walking!

For dinner that evening we visited the Hofbrauhaus Beer Hall. That was an experience in itself because the service was soooo bad! In all honesty, I think the waiters are overworked, but it was getting a little ridiculous that we couldn’t place our food order after waiting more than 30 minutes. This was with all my new dining mates trying to flag down the waiter to tell him to hurry up and take our order. Lol. While the food was decent and the atmosphere was enjoyable, I don’t recommend going if you’re extremely hungry. =P