Moving onto the main highlight of the trip – Oktoberfest. The day after Hallstatt was another long train journey to Munich. For the next two days in the city I bought a regional ticket to travel within Bavaria. One of the cool things about riding the DB is that group rates are often a lot cheaper. A ticket for a single traveler would cost €25, while an additional person was only €7 extra.

Once we arrived in Munich, we stopped by the hotel to drop off our bags, then it was off to Theresienwiese Station and the Oktoberfest grounds. We had a bit of a rainy start to Oktoberfest because the moment we got off the train it started pouring rain. We waited it out for a few minutes and once it lessened we headed over to the fair grounds.

While Oktoberfest is completely free of charge to enter, they do have a pretty strict security check at the gates. Backpacks are not allowed inside so we had to leave it in storage for a €4 charge. Once we finally stored our bags and made it inside, we stopped by the first beer tent we saw – the Marstall.

One of my favourite things about the festival is how decked out all the beer tents are. Apparently it takes workers 2-3 months to do all the construction inside. Each tent has its own flair and it was fun seeing how different they were from one another. Marstall was one of the ‘smaller’ big tents, but it was super cozy inside. I especially loved how the band played on a stage with a moving carousel. =D 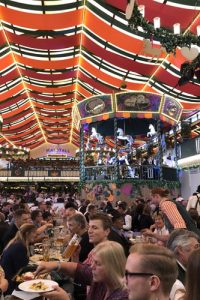 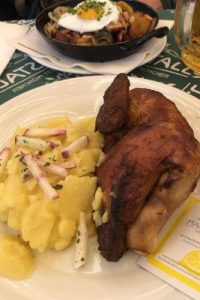 One thing to note about Oktoberfest – while a lot of the tables inside the tents are reserved, there’s usually a few rows that are unreserved seating. I’m not sure how busy the tables would be in the evening, but if you’re in a small group then it’s easy to find a spot to sit during the day. Another thing to note – one waiter is responsible for an entire row/area. You do your ordering with the same person and each time they bring your food or drinks to the table you pay them directly. I thought that system was pretty convenient.

The Marstall was probably one of the fewer beer tents that had 0.5L of beer on sale. Most other tents the smallest amount was a mass, which is exactly 1L. Since it was lunch time when we arrived, we ordered food as well. I highly recommend their roast chicken and potato radish. =)

It was raining on and off the rest of the day, and even though we were in and out of the beer tents it was still miserable. Once we decided we had enough, we headed off to a nearby mall to dry off. Even as we were leaving there were still so many people coming into the grounds. I’m not sure how everyone managed staying dry while wearing their dirndl and lederhosen, but I was impressed that everyone dressed for the occasion. 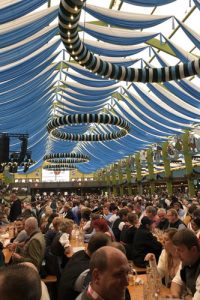 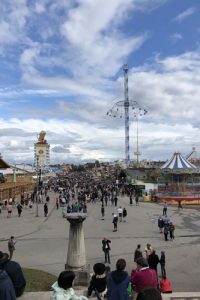 As it was still raining that night, we took the train over to Marienplatz and pretty much went inside the first restaurant we saw. While the weather didn’t cooperate for our first day in Munich, at least we still had a lot of fun experiencing the festivities!