When I was planning my trip to Europe, I had some side trips I knew I wanted to do. However, in addition to traveling between three major cities, figuring out the logistics of how to fit in these side trips was a bit of a hassle. For the most part I had planned everything perfectly – I left enough time for sightseeing, made all the reservations I needed, and got all my connections figured out – with the exception of my day in Hallstatt. =P

So to begin, the trip to Hallstatt from Salzburg would take a little over two hours each way. The first leg of our journey would be by train, followed by the ferry. Overall I think we spent more time getting to Hallstatt than we actually spent in the city. Lol.

Once we got off the train, everyone filed into a line to wait for the ferry. We paid the €6 fare for the return journey, then we were on our way to Hallstatt. I think the best view of Hallstatt is actually from the ferry, because you can see all of the island from the distance. Plus it was beautiful being surrounded by mountains on all sides. I think I was already in love with its beauty even before getting there. 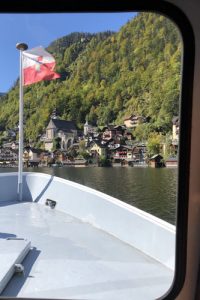 The one unfortunate thing about Hallstatt is the sheer amount of tourists in the city (obviously with me being one of them). Hallstatt has seen an influx of tourists in recent years and I actually saw an interview on BBC with the mayor commenting on the issue. Throughout the island there are signs posted in Chinese and English asking visitors to be respectful of private property and to keep noise levels down. Luckily the majority of the tourists are crowded around the docks (where many were staging elaborate selfies), so as you move further into town it doesn’t feel as crowded.

The one big mistake I made was not scheduling enough time. As I had already booked a tour of the salt mine, we were limited with the amount of time we had prior to the tour. So while we had time to stroll around the island, we didn’t have time to eat a proper meal. Secondly, the town is more spread out than I originally thought, so I didn’t factor in the extra walking time it would take to get to and from places. Both mistakes combined was why I was almost certain we would miss our train back later that evening. Hehe.

Nevertheless, Hallstatt was absolutely gorgeous no matter where we went. The church and cemetery were stunning with the amount of colours inside. Even the ossuary, where they had skulls and bones of the dead on display, was equally worth visiting. 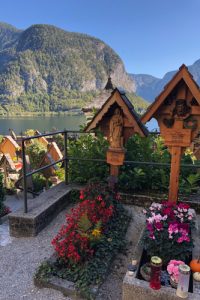 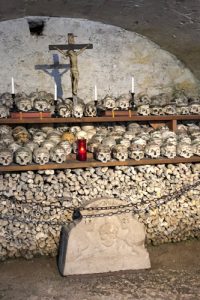 The salt mine tour was really cool. First you’re led into the locker/change room area where you can drop off your bags and change into miner outfits. Then you tour the rooms inside the main building where they give you a brief history of the salt mine. Finally you’re accompanied by two tour guides who take you inside the mine.

Once you make your way in, there’s two wooden slides which takes you about 400m deep into the ground. There’s also a salt lake at the bottom which illuminates with a light show. On the way back, everyone hops onto a train which takes you out of the mine. Overall it was a cool experience and I would totally go again just for the slides. =P

Once we finished the tour we had about an hour to make it back for the ferry. We quickly dashed over to the Skywalk so I could take a photo from the viewing platform, then it was a long line up to take the funicular back down. Luckily we were the last two people who made it into the car, so we were able to stop by the gift shop really quickly. Then it was a mad rush back to the docks. It was a miracle that we made it with time to spare, so as we were waiting in line I bought [and devoured] a hotdog. Hehe 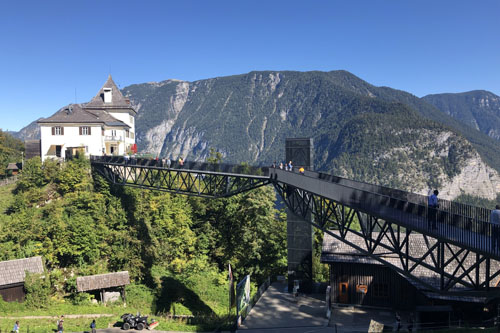 While timing was really tight towards the end of the day, Hallstatt was definitely worth the 5 hour journey. If I had to do the same schedule again, I would either take an earlier/later train or stay overnight and do more sightseeing in the area. The nearby town of Bad Ischl is also a popular destination. Another area I would have liked to visit is Berchtesgaden National Park, which has the Königssee and is close to the Eagle’s Nest lookout point. But since there’s too many locations to fit in one trip, I guess I’ll have to start planning another one sometime. =P