Day 3 in Vegas. We made sure we got plenty of rest after the exhausting day at the Grand Canyon the day before. We took it a easy in the morning and decided to venture to the pool for some R&R. The MGM is touted as having one of the best lazy rivers on the Strip. Initially I wanted to try the lazy river too, but after seeing the tube rentals priced at $18 a day, we decided it would just be cheaper to swim in the pool. Lol

After getting dressed, we headed out on the Strip straight to the Bellagio for their brunch buffet. Brunch buffet at the Bellagio was sooooooooo nice! It was 10x better than the buffet at the MGM Grand. I think I lost track of how many plates I ended up eating, but at the end I was too full to even a eat a single piece of cake from their dessert table. (And their selection of desserts was probably one of the better ones I’ve seen.) Since there wasn’t a sitting limit at the buffet, we ended up staying there for a couple hours. I needed an extra 30 minutes to properly digest before I could find space to fit two pieces of cake. =P

Once we finally had our fill, we spent some time exploring the Bellagio. I went and saw the glass display in their lobby and took photos inside the Conservatory. My sister went and explored…the casino. LOL.

Later we went next door to the Forum Shops at Caesars Palace. If I had all the money in the world, it would probably be worthwhile spending an afternoon shopping at all the brand name boutiques. Window shopping really didn’t cut it. Hehe. We ended up walking to the Venetian after we finished at Caesars. Again, it was the exact same with all the high end stores. However, it was nice seeing the gondolas at the mall. 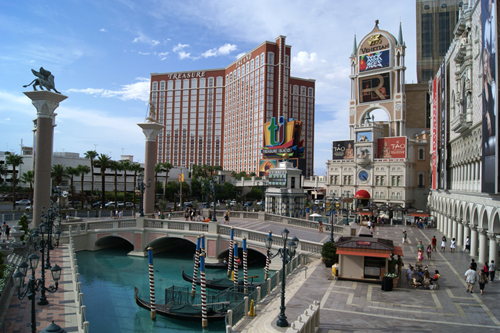 Later on, we had to head back to the Bellagio for dinner before seeing O that night. I was still too full from brunch (and this was hours later with lots of walking in between). However, because the three-course dinner was already prepaid along with the show, I had no choice but to eat again. I ended up getting their caesar salad, truffle penne and their specialty donuts. I sort of regret not being able to eat, because their food was actually very good. I think I learned my lesson about buffets. =S 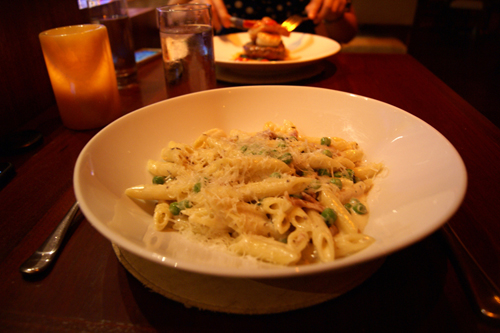 After dinner, we got in line to go see O. I was looking forward to this the most cause it had raving reviews. I’ve also never been disappointed with a Cirque du Soleil performance. I really enjoyed the show, as it was mesmerizing with the synchronized swimming and the diving. The only sad part was the overwhelming wave of sleepiness I felt throughout the entire show. Luckily I didn’t fall asleep, but I still wish I was more awake because I would have enjoyed it much more. When the performance ended, we took our time to head back to the hotel. It was nice catching a glimpse of the Bellagio fountains from the other side as we exited. 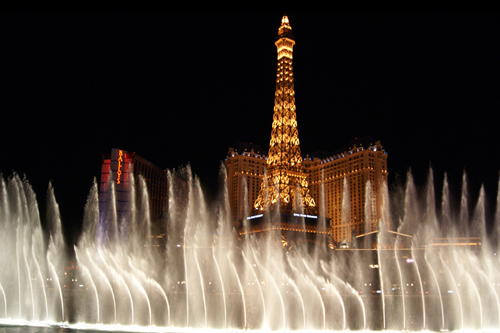 Overall I would call this day ‘too much food’ day cause I think I ate a week’s worth of food in a single day. I guess in terms of indulgences in Sin City, mine is totally not gambling or night life, but rather eating. LOL.