Heat stroke – day 2. We got up at the crack of dawn the next day to begin our long journey towards the Grand Canyon. We got to our bus stop just outside of the MGM parking lot and ended up waiting for half an hour before the bus came to take us to the terminal station. After checking in and getting assigned our buses for the day, everyone grabbed a danish and a bottle of water and boarded the bus. Then it was a straight journey all the way to Arizona.

We made a pit stop after two hours at Castle Rock to stretch our legs. We were pretty much right in the middle of the desert by that point. There wasn’t much to see around us, but it wasn’t as sweltering hot as I had expected it to be. 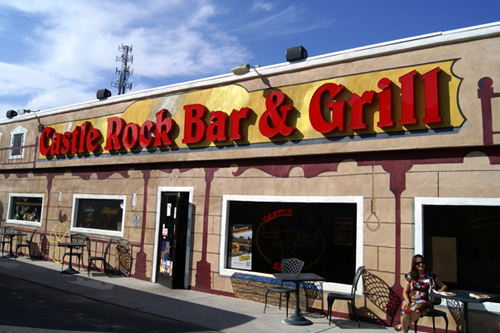 Another two hours later we stopped at an old town along Route 66 for lunch. Lunch was buffet style again, but since there were a couple buses eating at the same restaurant, it was a little busy at the buffet lines. We pretty much only had time to grab a plate of food before we were whisked off again.

Finally about half an hour later we were at the Grand Canyon! The bus would be dropping us off at Mather Point first, then to Bright Angel. Our bus driver Willie gave us the option to either walk between the two points or take the bus. Since it was only a 2.5 mile trail, I managed to convince my sister to walk. Luckily because of the elevation, it was slightly cooler as we began our trail. I got to take a picture with the ‘welcome’ sign before hordes of other tourists rushed in. (I actually got stuck taking photos for these annoying tourists before I got really fed up and left). 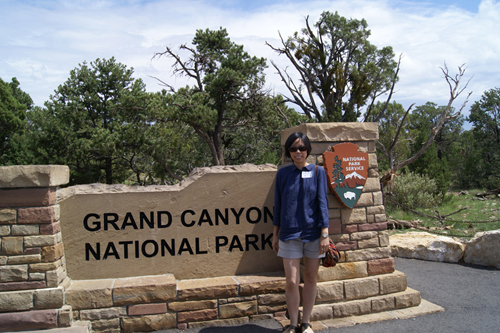 Anyway, it was quite breathtaking getting my first glimpse of the Grand Canyon. The Grand Canyon seemed to run endless into the distance. It was pretty hot out, so I quickly threw my hat on to avoid getting burnt. The trail itself wasn’t hard to walk and we stopped often to take pictures of the view below. There were a couple of visitor info stations along the way, but I think it would have been more profitable if they had an ice cream truck midway between the two points! 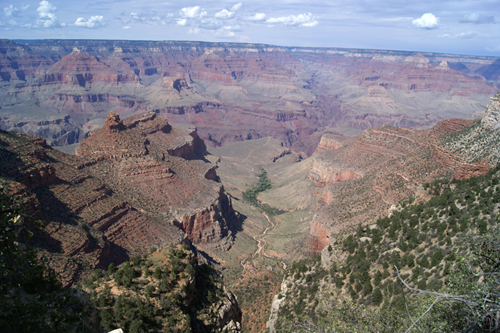 After walking nonstop from the second half of the trail onwards, we finally made it to Bright Angel. (We were sort of worried we weren’t making good time, haha.) The view from Bright Angel was pretty amazing. However, the most important part was finally getting the ice cream cone I had been craving for for the past two hours. =P 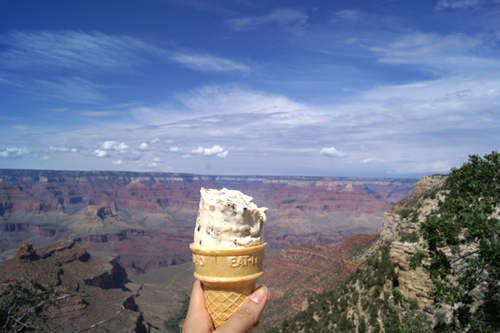 The bus came to pick us up not long afterwards. It was nice to sit down after walking the trail, but it was another 5 hours back to Vegas. We did make a pit stop along the way to buy dinner at a convenience store, but there wasn’t much else in the area except for a very suspicious looking ‘House of Chan’ restaurant in the middle of nowhere. LOL. We made good time coming back to Vegas, so after dropping our bags at the hotel room, we decided we would venture out on the Strip.

Even though we hiked for a couple hours at the Grand Canyon, apparently it wasn’t enough for us because we somehow ended up walking from our hotel all the way to Treasure Island and back. It was insane the amount of walking we did that day!! We pretty much speed-walked the entire way to TI to catch their 10pm show. I’ve never seen so many strollers out on the streets at night! It was so much work just maneuvering around people. 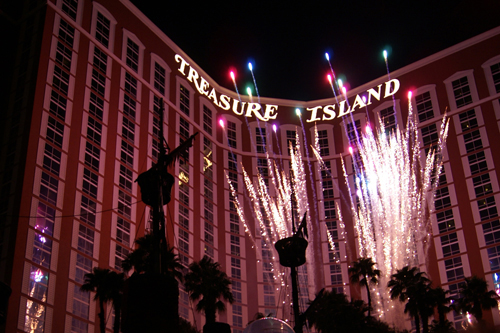 After the show was over, we slowly made our way down to our hotel. It was my first time out on the Strip at night, so I ended up taking lots of photos on the way back. We caught a bit of the fountain show at the Bellagio and saw some of the nightlife by Paris and Caesars. By the time we made it halfway down, I was hungry again so I made my sister stop to grab a snack. Finally by the time we made it back to our hotel it was quite late. We had been out for about 18hrs already, so we definitely had a good night’s rest by the time we tucked into bed! 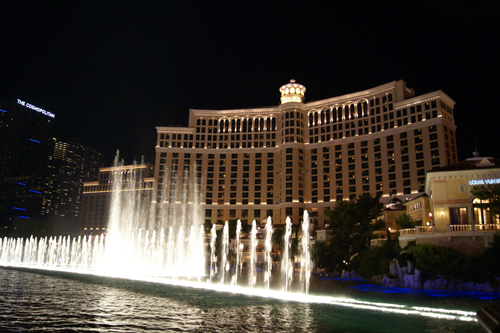