Back from another vacation! I don’t think I’ve done two back-to-back trips to the States before, so I barely had time to crack open a travel book before I took off for Las Vegas. Sin City is really the correct term to describe Las Vegas, because the entire time I was there I spent in pure indulgence. I didn’t think it was possible to eat three buffets in four days, but somehow it happened and I think it will be the last time I attempt at that feat again. LOL 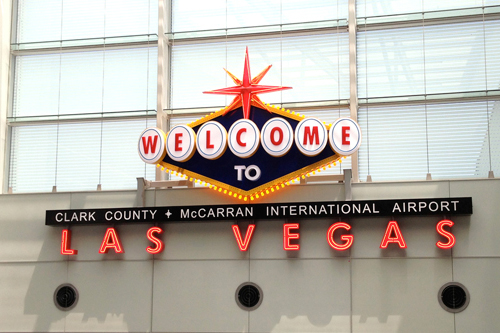 Flying out from Pearson on Thursday morning, we arrived at Terminal 3 bright and early and had around 2 hours to kill before boarding. It was my first time flying with WestJet, so it was a completely new experience for me. The flight itself was about the same as any other flights I’ve been on, so it was a smooth ride all the way to Vegas. Once we landed, we had to locate our shuttle bus to take us to the hotel. The minute I stepped outside I was immediately struck by the intense desert heat. It was stifling hot!! I think I’m more used to the heat in Asia with the added humidity, so it was new feeling being baked alive by the scorching sun.

We loaded on the shuttle bus and it took us right to our hotel, the MGM Grand. The moment I caught sight of the hotel and the rest of the Las Vegas strip, I was sort of astounded by how kitschy everything was. LOL. Regardless, I was quite pleased by how nice our hotel was, but the enormity of it was a little too much for me. Everything was just ridiculously big!! It took forever just to walk from the lobby to our hotel room.

After dropping off our bags, we were quite famished and quickly went on a hunt for food. We decided just to stay inside the hotel and ended up eating at the Rainforest Cafe. For some reason I’ve never eaten at any previously, but I’m pretty sure there was a good reason for it, cause the food was quite terrible. Anyway, I was starving so it did the trick! 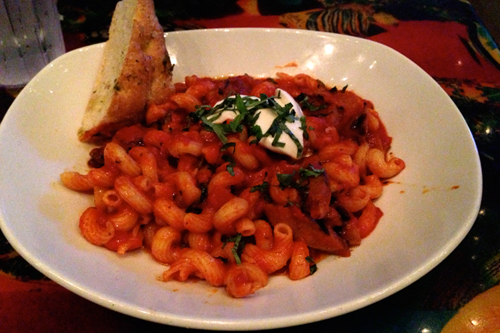 Later on, we decided we would venture out by foot to see the Shark Reef Aquarium at Mandalay Bay. The strip doesn’t look that big on the map, but once you actually attempt at walking, you realize just how FAR the hotels are from each other. Luckily, it was a bit of an overcast day, so it was still manageable making it over to the aquarium. 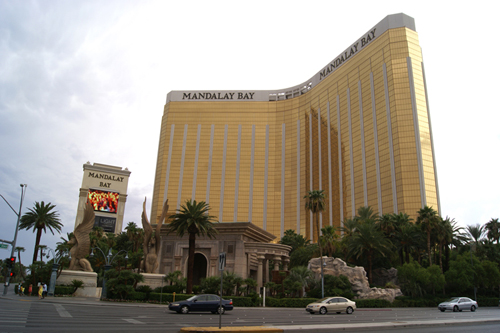 I have to admit though, the aquarium itself was crap. The $18 admission was overpriced for the tiniest aquarium I’ve been to. If I had known ahead of time, I would have skipped it for sure. While it was nice inside and the displays were interesting, it should have been at least double the size to be called an aquarium. It was more like an oversized fish tank. LOL. Anyway, it was still good to check out the hotels on the south strip, so it wasn’t a complete waste of time.

As we headed back north, we stopped by the Tropicana Hotel to see the Mob Attraction. The Mob Attraction was pricier than the aquarium, but it was definitely a lot more fun and well worth the admission cost. Essentially it’s an interactive attraction with actors who lead us on a ‘mission’ to make deliveries for the mob. It was kind of intimidating at first, but we sort of played along and successfully made the exchange. Except at the end they thought we snitched on them and we ended up getting silenced by the mob. =P 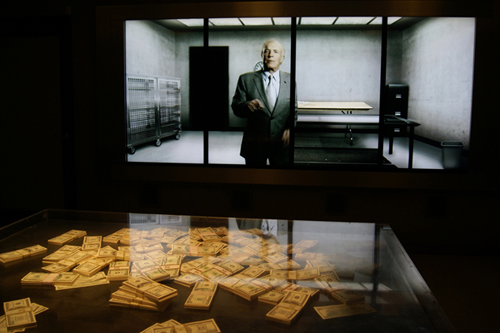 It was a lot of walking by the end of it, so we trekked back to the MGM afterwards and took a break. Later that night we ate a buffet dinner inside the hotel. The MGM buffet wasn’t on our list of places to eat, but since we had complimentary buffet vouchers, we couldn’t complain either. Afterwards we finally tucked in and called it a night! Not bad for our first day in Las Vegas!