It’s taken me forever finish cataloguing a third of my trip. I need to hurry up and finish writing entries before I forget everything I did! Plus I”ve had to backpost all these entries! 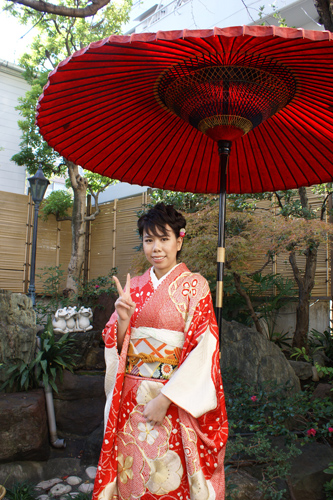 So moving onto Tokyo –

We took a 50-seater plane from Sapporo to Tokyo. It was the tiniest plane I’ve ever been on, but luckily there wasn’t a lot of turbulence and we landed in Tokyo safely. As we were running late, the first thing we did after grabbing our luggage was head for the booth that sold N’EX tickets. I forgot it would take around 90 minutes to get from Narita to Tokyo and I had foolishly made plans to meet up with friends for dinner later that night. So I pretty much had two options –

Take the next train which would leave in 15 minutes and get to Tokyo somewhat on time; or take the later one leaving in 45 minutes and be late. However, because we had so much luggage, I figured it would be safer to take the later train so we would have time to get down to the platforms.

But low and behold, the lady at the N’EX booth had given me tickets for the next train! Time to departure: 12 minutes.

(Side note: If anyone has taken trains in Tokyo before [or actually any part of Asia], you”d know that their trains are always on time to the minute. Whereas in North America, 99.9% of the time trains and buses are always late. However, this was totally not going to help me in this situation!)

So here I am starting to panic and dragging my luggage left and right to find an elevator that would take us down to the platform. Luckily I’ve been to Narita many times, so I kind of knew what to expect. I was trying to picture the route to the platforms and time how long each duration would take. First was the matter of getting downstairs.

Time check after getting down to the platforms: 7 minutes.

I think we were going to make it. However, the next big struggle was pulling our luggage through the ticket gates. Between my sister and I, we had 2 big luggage and 2 hand-carry pieces. It was a bit of a hassle trying to fit everything between the narrow gates but we managed.

Time check by then: 3 minutes.

Of course, because the Narita Express is all reserved seating, our car happened to be right at the very end of the bloody platform. So, we ran all the way down the platform with our luggage in tow. I kept glancing at my watch and saw that we had about a minute left till departure.

I finally spotted our car up ahead. We quickly hopped on and started dragging our luggage on board. The moment I yanked our last piece of luggage through, the doors slam shut. OMG. I’ve never before worked up such a sweat boarding a train before! And I was still wearing my winter coat from Sapporo!!

*Collapses in a heap*

Moving onto the actual Tokyo experience. I was meeting some online friends for dinner for the first time. As they know I’m such a huge Arashi fan, they decided to take me to the restaurant were Nino filmed Haikei, Chichiue-sama.

I was still running a little late, however so I got out of Iidabashii Station in record time. Yuka, Junko and Yumi were waiting there already. I think they were surprised I made it since I had literally stepped off the plane only a couple hours earlier!

Off we went to the restaurant. Since I have never seen the drama, I had no idea what kind of restaurant it was. I soon found out it was a very traditional Japanese-style restaurant, with private rooms for each party. Yuka had made reservations ahead of time. Apparently because it’s in such a high demand, if you cancel the reservation without any advance notice, they charge you the full amount of the meal. I wonder if the restaurant got more popular with the drama? 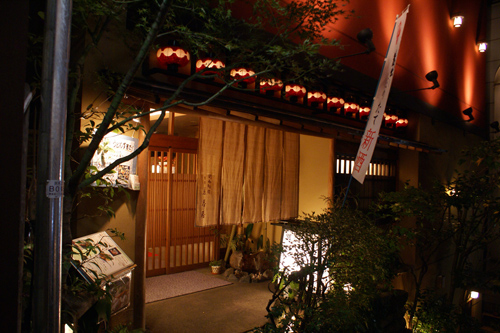 Anyway, we were all seated together in a private room. I mentioned to Yuka that I wanted to try nabe in Japan. However, I had no idea how many varieties of nabe there were. First we were served several courses of appetizers, before the main udon-nabe course came. (I still haven’t figured out the exact name of this dish. I should have written it down when they told me!)

The food there was so yummy! We were chatting throughout dinner and everyone was gracious enough to indulge me with Arashi talk. Heehee. I think they were all surprised at how knowledgeable I was! Junko even asked her friend for tips on Arashi and she friend told her to tell me about Aiba’s family restaurant. I was like, “I already went there last year!” 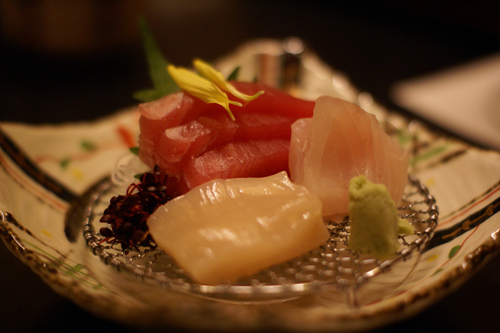 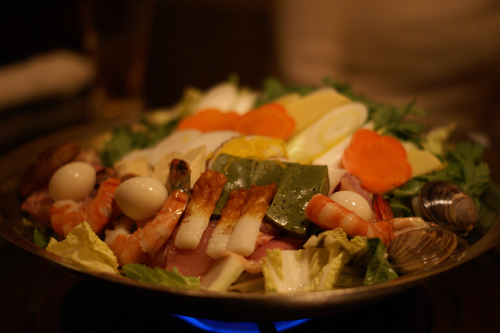 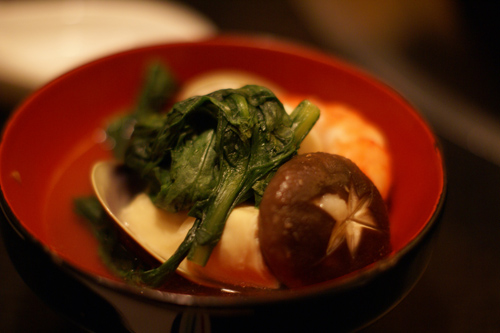 Anyway, everyone was so nice. I’m lucky I haven’t met any weirdos off the internet yet. LOL! At the end, they insisted on treating us to dinner. I tried to protest, but miserably failed. They were such great hosts that I couldn’t argue with them.

Later that night we went past the shrine where Nino filmed scenes from the drama. It was closed already, but I took a shot through the gates. Walking back to the station, I spotted a Geisha on the streets! I’ve never been to Kyoto before, but apparently it’s rare to see Geishas in Tokyo. I was so lucky she agreed to take a photo with me! 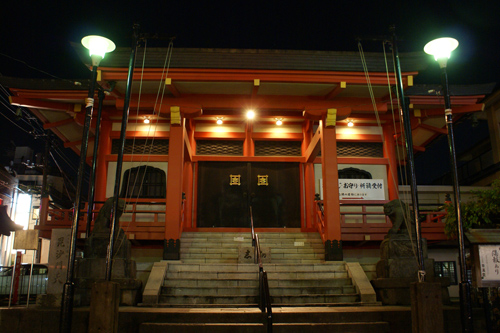 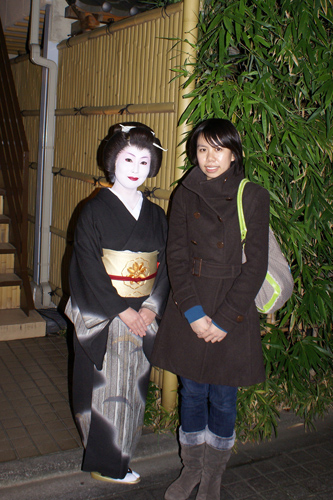 Anyway, the rest of our time in Tokyo was mainly spent on shopping and eating. Since I’ve been in Tokyo a lot, we ended up going to some of the same spots, like Yokohama and Odaiba. And of course Shibuya and Harajuku.

The only new place I visited this time around was Asakusa. It’s by far the most touristy place in all of Tokyo. Touristy for foreigners I mean. It was fun though! 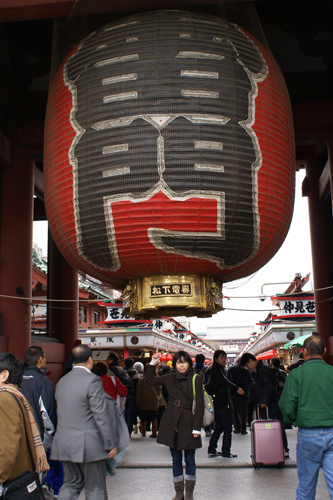 The only other thing I tried for the first time was wearing a kimono. It was super nice! We each paid 17,000 yen, which included getting hair and make up done, plus having someone put the kimono on and a set of three studio shots. The studio was called Katsura and it’s really close to the KDDI Design Studio in Harajuku. There’s actually a small garden outside, so you can bring your own camera and take shots wearing the kimono outdoors! I spent way too much time there and almost missed my bus to the airport because I never learn to schedule my time properly. But I highly recommend it if you want a keepsake of yourself wearing a full kimono. Cho pretty! 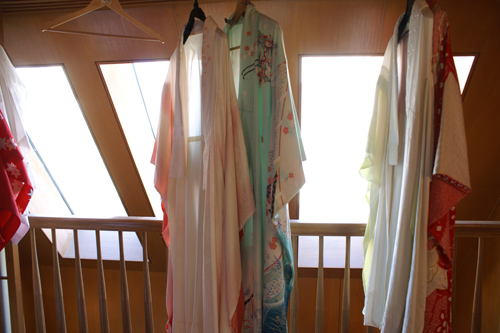 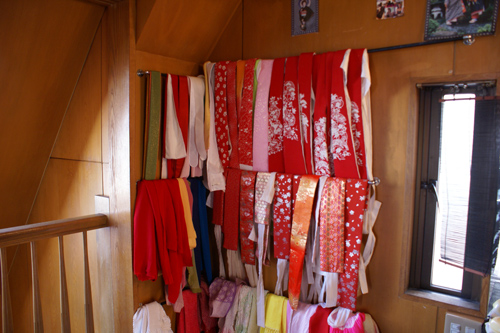 So to wrap up this entry – I had so much fun in Tokyo this time! I’m so glad I was able to meet with everyone. I think I’ve definitely covered all the ‘touristy’ attractions in Tokyo. Up next will be exploring more cities in Japan! =P